You are here: Home / Community / Love Beyond Measure

Being a single parent isn’t easy. In fact it might be one of the most difficult “jobs” a person could have. But imagine being a single mother in a country where women have few opportunities, and you have no connections to help you. This is the situation many girls from the Namanjalala Community in Kenya have found themselves in. These young mothers face a lot of rejection, humiliation, and disappointment from their families and society. But thanks to God and the launch of a young single mother’s ministry at Ephraim Kinship Project the girls are seeing love beyond measure.

The young mother’s ministry launched with many young mothers coming to the first meeting. The meeting started with pastors sharing a scripture with the girls and encouraging them in their faith journey and their journeys as mothers. This encouragement was so important to the girls since most of them have dropped out of school and don’t have a way to provide for themselves. 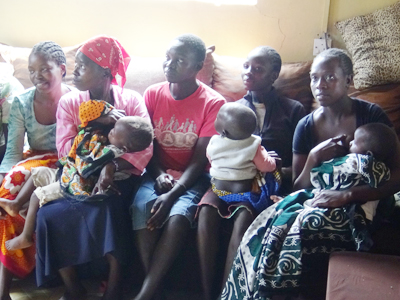 After hearing from the pastor, the girls had the opportunity to share some of their struggles with each other. One girl, Brigid, gave her testimony to the group. Brigid spoke about how she had started practicing prostitution to get money to feed her two children. She later stopped practicing prostitution because she had contracted STDs and she was afraid of what would happen to her children if she became sick or even died. Because Brigid was willing to open up and be so honest about her story, other girls also shared their stories that night and they began to find healing through the group.

This support group is only the beginning for the young mother’s ministry. The Ephraim Kinship Project hopes to eventually have a training center where they can teach the young mothers different trades. These different trades like tailoring, music, baking, hairdressing, and others would allow the mothers to provide for themselves and their families. We also hope to give the younger girls opportunities to go back to school and finish their educations.

Thank you for the support you have provided to get this ministry started! The support group has already shown love beyond measure to girls who felt discriminated and discouraged in the past.

Keep praying for the girls, that they would continue to be encouraged and find healing. And join us as we provide more opportunities to these girls through training and schooling so they can make a way to support themselves.