You are here: Home / Medical / Your Gifts Saved Racheal’s Life! 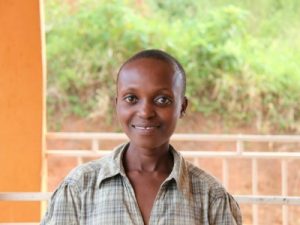 Do you remember Racheal? She’s the 16 year-old-girl living in the Kireka Kinship home in Uganda who nearly died due to a liver disease (check out Racheal’s story).

You remember how terrified Racheal was that she would die, as she watched her foot and her abdomen swell unnaturally because of the disease affecting her liver. She lived in constant fear of what was happening within her body, and wanted so deeply for a chance to get better.

And, as you probably know, Racheal needed $2,000 in order to see a private doctor at a hospital in Kampala, Uganda where she would be able to get the medical attention she needed.

Well, thanks to your care Racheal is on track to feeling better!

The doctors at the Cadic Hospital in Kampala did confirm Racheal had a chronic liver disease. But instead of the doctors saying there was nothing they could do, which Racheal had heard time and time again, they recommended a medication that would reduce Racheal’s swelling. The doctors also put Racheal on a special diet, eating lots of fruits and drinking juices, which would help clean her liver.

After only a week, Racheal is seeing and feeling a difference in her body. The swelling in Racheal’s stomach has reduced to almost normal and her feet are no longer swollen at all! She is feeling so much better than she was before. And even more than that Racheal is no longer living in a constant fear of death, but is instead looking forward to life!

Thank you so much for having made it possible for Racheal to receive the best treatment possible. Your gifts have given Racheal a new chance at life!