You are here: Home / Child Stories / Her Pastor Refused to Accept a Death Sentence

Can you remember being six years old? It’s a bit difficult to recall! Where would you have been at six years old without your parents? I remember that my parents were my heroes. Two invincible pillars whose hugs could cure any ailment and chase away any fear.

I couldn’t imagine living without them. But for little Cinthia from the Manasseh Kinship in Kenya, she didn’t have a choice. 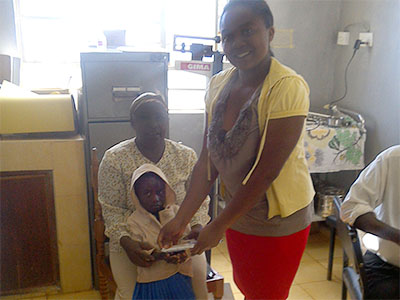 Cinthia lost her parents, her pillars, before the age of six. Both of her parents died of HIV/AIDS, and she was alone and sick.

In many cases when someone from the community brings a vulnerable child to a Kinship Home, the child is in bad shape. When Pastor Martin, the pastor at Manasseh Kinship, began caring for Cinthia, people warned him that the little girl wouldn’t live long. But Pastor Martin refused to be discouraged. Like you wouldn’t give up on your own child, he wouldn’t give up on Cinthia.

Because of amazing contributors who support the Manasseh Kinship, Pastor Martin can take care of children in the most desperate of situations, like Cinthia. And guess what? This little girl made it to her sixth birthday because of this support, and she’s flourishing!

She’s in good health now, but Cinthia still needs monthly checkups at the local clinic. Unlike most little girls her age, she has to take antiretroviral (ARV) drugs, a common treatment for HIV. According to the World Health Organization, ARVs are used during antiretroviral therapy (ART) to “maximally suppress the HIV virus and stop the progression of HIV disease.” The number of AIDS-related deaths has decreased worldwide after a push to get this treatment to some of the most affected countries, with Kenya being one of them.

Now Cinthia, the little girl who wasn’t even supposed to survive, has just been celebrated by the entire hospital as the child who has most improved her health.

Thank you for your incredible dedication to children like Cinthia. She couldn't have made it without you. Please pray for her continued good health and for all children like her fighting their own battle with HIV/AIDS.