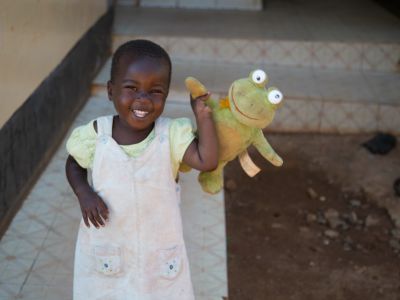 Esther was born on the side of the road to a Schizophrenic mother. Due to her poor mental health Esther’s mother often roamed the market with her baby and got her meals from the garbage dump. Esther’s mother lived with her grandmother who was also was suffering from mental health issues. These two women lacked the mental capacity to look after Esther and often left her unattended.

Esther’s mother and grandmother lived in a mud thatched hut with a leaking roof and broken door. Esther was often left alone for hours, hungry and crying in this hut while her mother went to the streets to look for food in the garbage dumps.

One day, a neighbor realized that she had not seen Esther’s mother or grandmother for two days. When she checked the hut, she found that Esther had been alone and screaming the whole time. She took Esther to the children’s department of Matisi who brought Esther to Ephraim Kinship for safety.

Esther’s mother was also found and taken to a mental hospital so she could receive help. We pray that Esther’s mother will get better and one day be able to look after her little girl.

God is doing a great work in Esther. She joined the center as broken little girl who didn’t like affection and only liked to hold her teddy bear but now she’s learning to receive and give affection to the other children.