What were you doing on August 9th, 2014? That day may not be significant to you, but for Mary Atieno, it was the beginning of a new life. It was the day she arrived “home” at Geta Kinship. 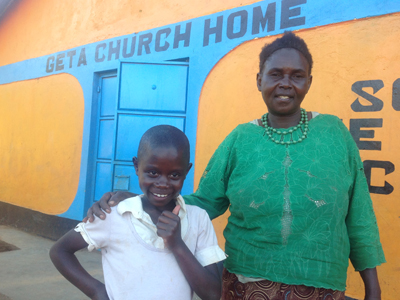 Mary is an eight-year-old girl with a lot of spirit. She is always happy and eager to welcome people into her home. But things weren’t always that way. When Mary was only four-years-old, her mother passed away from H.I.V. Mary is also H.I.V. positive, which meant that no one wanted to take care of her after her mother died. Even her brothers and sisters looked at Mary with shame because of her disease.

Luckily one of her older sisters, who was married and had a family, was willing to take Mary in. Mary lived there for a few years and everything was going well until one day when a malicious neighbor told Mary’s brother-in-law that Mary was H.I.V. positive. Mary’s sister had kept Mary’s disease a secret from her husband because she knew that he wouldn’t let Mary stay with them if he knew.

When the husband found out he started beating Mary and one day he chased her out of the house. Mary had to sleep in their outhouse that night because she was too afraid to enter the home. The next morning Mary’s sister found her sleeping outside and she took Mary to a neighbor’s house to hide her until she could decide what to do.

Mary could not go back to live with her sister, because her brother-in-law had threatened to kill her if she came back into the home. Mary's sister was confused and didn’t know what to do, luckily she was going to a neighboring church at the time and decided to ask a women in the church for advice. The women told her about Geta Kinship and said she should take Mary there.

From the day Mary arrived, Geta Kinship became a safe and secure home for her. It was hard for Mary’s sister to leave her at the Kinship Home, but she knew that Mary would be safe and well taken care of by the caregivers.

Mary has been living at the Geta Kinship Home for 10 months now. The caregivers say Mary has made very big improvements. When Mary first arrived she would often sit alone and cry and if someone called for her loudly Mary would start shaking because she was afraid of being beaten. However, now Mary is undergoing counseling which is helping her and she is now learning to trust her new family.

Mary will continue to grow and find healing through God’s love and your prayers. Thanks for supporting girls like Mary!