You are here: Home / Appreciation / How One Day of Generosity Turned into a Lifetime of Change

Last June 21st, compassionate people like you forever changed the lives of the struggling children living in the small Nyasi village in Kenya during our annual giving day, More Daylight to Donate.

You heard their cries for help. You took to heart their dire need for a safe haven. And you made it happen!

You jumped in at the ground level and took an empty building and transformed it into a loving home.

And we’ll never forget the selfless way in which you brought the Nyasi Kinship Project to life for these kids.

At the time, the Nyasi Kinship Project was just a dream in the minds of Kinship Leaders and a prayer on the lips of suffering children in the community. They desperately needed a safe home where kids could just be kids. And with your generous gifts, you made that dream a reality.

More than that, you became an answer to their prayers.

Alex’s father beat him and his brother, Isaac, regularly. And one day their father’s anger grew so violent, he even murdered their mother in a fit of rage.

You rescued Alex and Isaac. You got them out of there.

Today, the Nyasi Kinship Project is filled with the sounds of playing and the laughter of children who needed a loving home. The kids are thriving, and see themselves as a family unit, not as children living in an orphanage. They have truly united and work together. 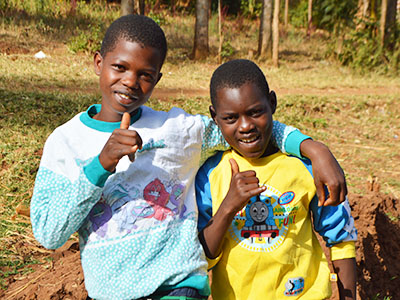 The past year has been full of newness. The children are constantly growing and changing. Their pastors and caregivers are praying with them on a daily basis and encouraging them in the safety and love of their new family.

Just recently, the Nyasi Kinship Kids received brand new clothes, which was a huge blessing and source of excitement. They’ve also planted a garden and are eagerly harvesting their first crops. And did we mention that the Kinship Project is currently in the process of getting a kitchen and a fence as well?

The orphans and widows you’re caring for at the Nyasi Kinship Project are eternally blessed by your support. You’re such a life-saver for them, giving children like Alex and so many more a place that welcomes them with open arms and hearts full of love.