What's Happening with Water in Africa?

Quenching the Thirst of Children and Families During Difficulties of Disaster 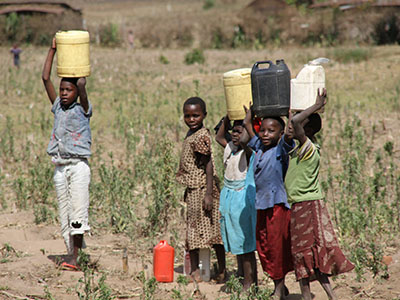 It’s morning in Kenya, Africa. Wandering sleepily, 12-year-old Kamali contemplates the long trek to collect the day’s water supply for her small village. As with most children of tragedy, Kamali has been tossed into the chaos of survival.

Instead of carting school books to class, Kamali now carts a 40-pound jug across miles of rough, isolated land to fetch uncontaminated water.

Sadly, she’s among hundreds of other girls and young women I’ve witnessed through many years of mission work who have been thrust prematurely into adulthood with life or death responsibilities.

I observe Kamali getting ready to make the harsh daily journey. She’s alone and unprotected. She stoops down to lift the heavy 20 litre jug and place it wearily on the top of her tiny head. Without any sign of defiance or fear, she steps forward.

I won’t see her again until she returns at dusk, hiding the hurt of tired feet and aching shoulders. But her eyes will tell me a different story.

Tiredness and hunger aren’t the only problems she faces. Before she gets to the river, she passes several busy roads with rushing vehicles and motorbikes. Rape on routes to rivers is very common in an HIV infected region.

Approximately 500 meters to the river, where the bushes start and people can not easily be seen, she will most likely be approached by street children selling common drugs, such as Bang and Cocaine. These street children, who are the same age as Kamali, have been hired to lure other kids into becoming addicts, just as they were. They are paid in Kenyan Shillings—KSh100/day or less than $1.00 US—as commission.

When Kamali arrives several hours later with her water-filled jug, she looks exhausted. Her voice is barely a whisper and her face is depleted of expression. I can’t tell if she’s hungry or sad. She’s disconnected from the activity around her as villagers get ready for the night.

And that’s what I know life is like for Kamali and hundreds like her. I’ve learned that more than 70 percent of females in Sub-Saharan Africa alone spend each day bringing clean water to keep their communities going. Together, their daily journeys total 200 million hours. 1

My purpose here is necessary and daunting. We have to get water closer to the village to save these impoverished children and broken families. I’m on the ground with many others for weeks at a time. We work around the clock with government officials, business leaders and volunteers to rebuild lives and restore hope.

I’m troubled by the many people in Kamali’s community and its surroundings, who are infected with and have died from Typhoid, Dysentery, Cholera, Bilharzia, among other waterborne diseases.

Two of our Kinship boys, Abel and Seth, are orphans due to water borne diseases. Their house was a few meters from the river, where their father was a farmer. They depended on the river for irrigation, drinking water, and washing. Other people also brought their animals to drink water from there, others bathed there, and others washed clothes from the same river.

The same people drank this water.

In these remote areas people do not construct toilets, they only go to the bushes for long and short calls. All of this contributed to a Cholera outbreak recently. Among those affected were parents to these poor boys.

When Abel and Seth’s parents fell ill, they had no way to get to the hospital. It was  on the other side of the crocodile-infested river that did not have a bridge. They learned one of their neighbors (also sick) tried to cross the river and was fatally attacked by a crocodile.

After suffering at home for one week, Abel and Seth’s parents passed away.

The two boys were brought to our Lodwar Kinship Project by their grandmother and this is where they now call home.

Water contamination, lack of sanitation and poor hygiene is one of the biggest causes of death, especially when tragedy strikes. Add to that the already alarming conditions of water scarcity and quality happening around the globe. Closer to my home, I’m worried about the state of California. Our efforts to provide relief and basic support in an established country seem impossible.

Yet the need in developing countries continues to spread rapidly.

As I read through numerous reports and studies on the water crisis, I’m alarmed by the number of people suffering from unsafe water2:

Without sufficient resources, millions of women, children and elderly globally will suffer from severe cramps, vomiting and running stomach resulting in weight loss and eventually death.

Missions, medicine and technologies aren’t enough to curtail the water crisis, especially in the most vulnerable regions of Africa, India and Asia. We desperately need education. Victims must learn the dangers of contamination and how to change simple routines.

It’s essential that we teach afflicted communities how to disinfect polluted water for cooking, bathing and agriculture. They also need to know how to conserve water. Fresh water continues to be in short supply in areas affected by global warming, droughts, floods and man-made destruction.3

When water is scarce, theft rises. Since the United Nations recognized water as a human right in 2010, large scale efforts to steal water became an increasing threat. These include illegally tapping into reservoirs and pipelines and deviant ways to avoid water meters.4

According to experts, half of the world’s population will be living in water-stressed areas by 2025.5 This is a stern wake-up call for all of us to prepare.  In a short while, Cape Town, South Africa will be out of water, despite current efforts to restrict water usage and consumption. Known as “Day Zero,” the threat is projected for arrival a year from now.6

I fear the situation will no doubt grow darker by more conflicts, war and disasters that we can’t predict. The burden to recover and restore communities in crisis, like Kamali’s, will get heavier for us. Other organizations and supporters will feel the hardship to keep up with the growing demand for resources and provisions.

When we equip Kinship Projects with newer extreme deep wells, we bring relief to families and children like Kamali, Abel and Seth. But it is now conceivable that thousands of other kids like them will perish without clean water. This has become a topic of great concern among the youth and young adults streaming out of the Kinships in Sub Saharan Africa. Their confidence in their own abilities to solve problems like these is invigorating.

It is a privilege to be able to watch them impact the Kinship villages, hamlets and communities where they are now the servants for good.

Cities around the world should prepare for running out of water, experts say