You are here: Home / Newsletter / Ian Almost Didn’t Make It: You Rescued Him from the Brink 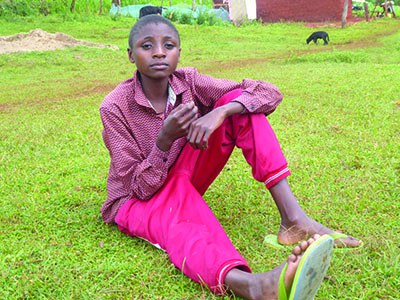 When Ian’s mom died, his whole world turned upside down, inside out, and shook him out into a reality he could hardly believe. She’d been sick, but not that sick - or so Ian thought. When he woke up one morning to his uncle telling him his mother was dead, he was in complete shock.

Ian never knew his father, and is an only child. It was him and his mom against the world. When she died, he was left to face the world alone. He was only 10 years old.

Ian was taken in by a family who promised to send him to school, but that promise turned out to be too good to be true. Instead, Ian was forced to take care of the livestock and worked around the house while he watched all of the other children in the house go to school. The man who was supposed to be taking care of him beat him severely with a cane and withheld meals from him, while the man’s children ridiculed him.

Ian got out by telling a family friend about his mistreatment, and eventually he made his way to the Aruba village. There, he found himself in slave labor at another abusive home, and he ran away to live on the streets. Finally, Pastor Daniel of the Aruba Kinship Project found Ian and rescued him.

Pastor Daniel says that when he first saw Ian, he wasn’t sure if he was going to make it. He was so thin, confused, and completely withdrawn. The clothes on his back were in tatters, and he smelled awful. He’d been through so much – would he ever recover?

Now, though Ian does have decent clothes to wear, a bed to sleep in, food to eat, and all of the physical comforts of home, what has transformed him the most is the fact that he has a safe place to live where he is loved and cared for. He knows he is wanted, and not a burden.  For him, being with other children like him, going to school, and being loved and treated with kindness is like a dream come true.

Pastor Daniel says, “Today when I see him, I see a bright young man, so active and healthy. Today Ian is happy and feeling at the right place. He keeps telling us thank you for bringing me here.”

With your support of Kinship United, you are rescuing Ian and children like him from the abuse and mistreatment of orphanhood that robs them of their childhoods.

Will you make a gift today to care for orphans like Ian and the widows who care for them?