Tragedy takes on many forms. Over the years I’ve heard a lot of different stories about how children become orphans. Whether it’s by disease, abuse, or just by sheer accident, one thing is still the same: in an instant, a child that once had the security of a family is suddenly all alone.

One woman told me a tragic story that is actually pretty common. You can watch her share it in a video here. She told me about how she fled her village in the middle of the night as gunfire popped all around her, and flames lit up the sky. Her whole world was under attack, and everyone just ran. This woman saw her friend, Nguma, trip and fall, losing her grip on her daughter Taba’s hand in the process. Nguma was trampled to death. Taba, and dozens of other children, wailed on the ground, calling desperately for their mothers and fathers who had been lost in the fray.

If you’re reading this, you are the kind of person who stops to grab orphans like Taba’s hands – when no one else will.

While the work is never done, I want to take some time to celebrate how you’ve taken the hands of thousands of orphaned children this year.

Like Justine and Agnes, who were brought into the Pabbo Kinship Project in Uganda after their father, a former Lord’s Resistance Army soldier, was murdered, and their mother ran for her life. Your support gave them a safe haven after their world crumbled down around them.

You cared for Erick, who was orphaned at the age of 13. Without his parents, Erick was abused and rejected by his extended family and was even mistreated by his own sister. Today, your gifts give Erick a loving family in the Aruba Kinship Project in Kenya and the opportunity to go to school. He hopes to become a doctor someday.

Even More Blessings in 2019

This year, you shipped millions of meals to Kenya, Uganda, Cambodia, and the Dominican Republic, and sent life-saving medical supplies too. Your support helped widowed caregivers and Kinship pastors in 10 different countries give once-hopeless orphaned children the experience of a happy childhood; some even got to go to the beach for the first time, or to visit a local museum. These are things they never would have dreamed of before you came into their lives.

“In the same way, let your light shine before others, that they may see your good deeds and glorify your Father in heaven.” Matthew 5:16

You are like a light that shines in the window of our Kinship Projects around the world.

Your gifts are a beacon of hope for the desperate child who will die if left on her own and the widow who has been rejected by her family and is out roaming the streets, with nowhere to lay her head. When the rubber meets the road, you make Kinship possible.

Kinship Projects are known far and wide as the only ones who will really be there when no one else can. They are a landing place for lost children, abused women, and anyone else who needs a fresh start and open arms.

We’re Not Done Yet

There are so many children like Taba out there who became an orphan in an instant, in the middle of a battle they never imagined they’d fight. They’re just crying on the side of the road, stunned and alone, while everyone else runs by, struggling to make it out alive themselves. 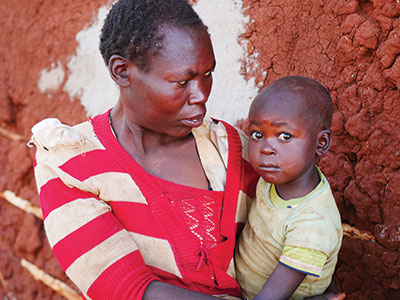 Have you ever wondered why God is so specific about orphans and widows? After seeing so many orphans like Taba who have their hearts broken by loss and end up in danger without their parents to protect them, I think God calls us to take care of them because His heart bursts for the most vulnerable. These lost children and outcast women are at the end of the line, and God asks us to be the ones to show them His love for them.

Are you with me? Do you want to share the Gospel with orphans and widows who have had their hearts torn wide open? Are you ready to help offer them healing and point them to love like they’ve never known before?

Please consider making a year-end gift to care for orphans and widows before December 31st.

Looking forward to serving with you in a new decade,