You are here: Home / Orphans / Did You Know there are More Orphans than Russians? 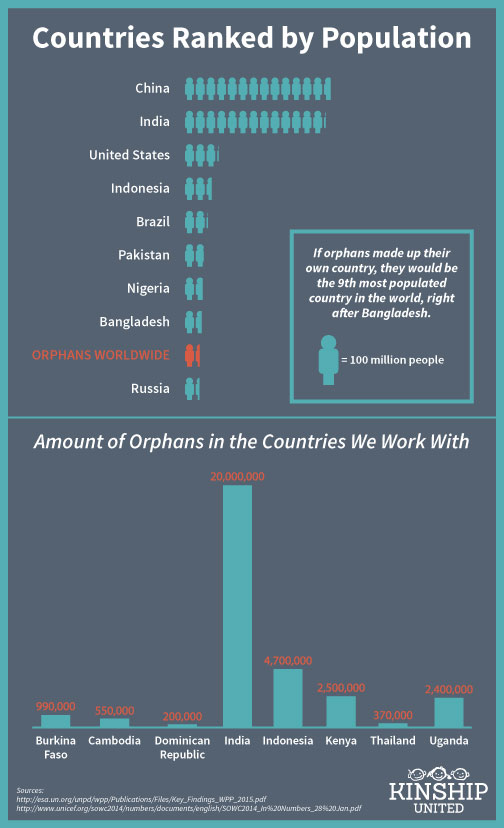 It is estimated there are over 150 million orphaned children worldwide. That’s about 2% of the world’s population. That might seem like a small percentage of the population until you realize that if orphans were going to make up their own country, they would be the 9th most populated country in the world, right after Bangladesh.

The numbers also become more tangible when you take a look at some of the countries we work with worldwide. When you see a country with 20,000,000 orphans the numbers begin to look a lot larger.

And even more compelling than statistics are the individual stories of the orphans we work with:

Dismas is mentally handicapped and was left on the streets after his parents died, but now Dismas has a home and a loving family with Emmanuel Kinship Project.

Esther was born to a schizophrenic mother who couldn’t provide for her. A neighbor rescued Esther after realizing she had been left in their hut alone for multiple days in a row. Esther was taken to Ephraim Kinship Project and was cared back to health.

Mary is HIV positive. After Mary’s parents died from HIV no one wanted to take care of her because of the stigma that comes with HIV, so she was left on the streets. Luckily for Mary, the caregivers at the Geta Kinship Project are more than willing to love and care for her!

Innocent’s family was torn apart by a rebel raid to his village. Innocent was lucky to survive, but was left with no family. Fortunately for Innocent Pastor Bosco from the Pabbo Kinship Project found him and brought him into the Kinship home.

A number as large as 150 million may seem daunting, but to the child’s life that is being changed, the number 1 is just as important. Will you join us in continuing to change the lives of orphans worldwide – one orphan at a time?

Today, on World Orphan Day, will you give to Orphan Rescue and Care?

Give to Orphan Rescue and Relief